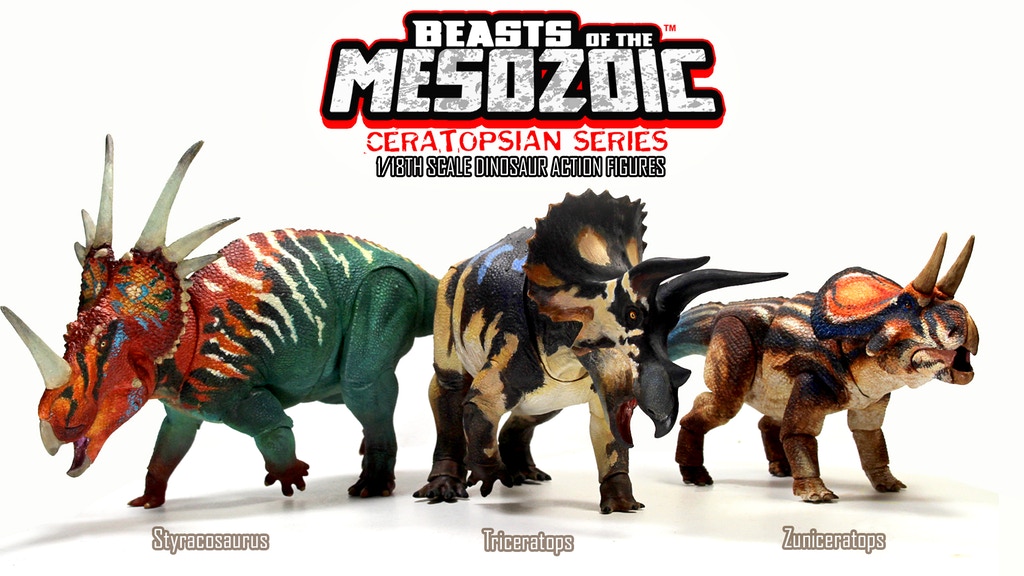 Often with action figure lines all you ever get to see is the figure itself, but what about the planning and designing that's done beforehand? One of the benefits of creating the Beasts of the Mesozoic toy line is being able to share insights into how the figures are made at every step. For a look at how this  action figure campaign came into being, let's go back to the beginning.

Just after sending out all of the completed parts for the Raptor Series to the factory in China (it took six months to sculpt all of the stretch goal parts!), I went to visit family on Thanksgiving vacation. While there, I decided to start jotting down ideas for the next 'Beasts' series, which was always planned to be Ceratopsians. Armed with only my trusty Princeton Field Guide to Dinosaurs and a sketchbook, I began jotting down ideas and possible scale sizes.

As you can see, some of these species ended up making the cut while others didn't. 1/12th scale was even considered, but it wasn't long before it became clear that 1/18th was the way to go for the majority of the line. You'll also note that the T-Rex was factored in from the beginning.

After I'd decided on the scale and the species selection, more visual context was needed for the sizes, and the quickest way to do this was to find modern skeletal drawings on the internet, mostly by Scott Hartman , and print them at 1/18th scale. By doing this, I was able  to see which animals had potential for parts sharing. And while there isn't a lot of variation among the ceratopsian body anatomy, I was careful to make note of the subtle differences, especially between the Chasmosaurines and Centrosaurines.

It was at this stage that I could begin planning the number of body types required. Even after this, more species would be added and omitted.

After finding my skeletal reference, I drew fleshed out versions of each to get a better sense of the part shapes and sizes. This was also the stage at which the articulation was decided.

Matching up species of similar sizes, I color coded each part to map out where each part could be used.

Keep in mind that much of this didn't make it through to the end, sizes would be adjusted, parts changed, and species traded out. Plus, being just side views, I couldn't factor the difference from front and top views. But despite all of this, the work here helped point me in the right direction.

As you can see, there were even a few planned that were smaller than Zuniceratops.

After I had a parts map designed, it was time to figure out the most efficient path to creating this vast parts library and it's initial figures. At the time, I was the only sculptor factored into this plan, so it was essential that I could see where I was going with each set of parts and how they would all be used on the upcoming figures. My starting points were set: Xenoceratops and Zuniceratops.

At first, as some of you may recall from the social media posts, I had planned to do two Kickstarter campaigns over two years- one for Centrosaurines and one for Chasmosaurines.

After a while though, I decided that it would be best to move on to Tyrannosaurs sooner, so I adjusted the plan to have only one Kickstarter for the Ceratopsians. I could then release the other previously- planned figures at a later time without crowdfunding while moving forward with upcoming Tyrannosaurs Series.

Sculpting began shortly thereafter for the first figure on the list, Xenoceratops, and the project was officially off and running!

Xenoceratops and Zuniceratops were not actually meant to be main campaign figures, but it seemed like the most logical place to begin sculpting-wise.

In the end, the large Xenoceratops worked better as a stretch goal and Zuniceratops fit well with the main campaign, being at a more affordable price point.

After two years of sculpting, a few adjustments to the plan along the way, and getting help from sculptors Jake Baardse,  Simon Panek, and Raul Ramos, we now have what we need to create 23 of the Ceratopsian species (25 total figures including the two are sub-adults).

It's been a long process, but well worth it as the figure count can be maximized while overall cost is kept down. It's the type of planning that is unique to action figures due to the amount of parts each figure is made of and one of the main reasons for keeping the family 'Series' approach with these figures.

In the end, twenty-five Ceratopsian figures are sculpted in a relatively short period of time thanks to thorough planning and design.

Hope you all enjoyed that inside look. Until next time!

We're soooo close to hitting that main funding goal! And as we approach those stretch goals, I wanted to share the completed Diabloceratops, which will be stretch goal #4. Take a look!

For more photos, you can see the full gallery here!

They recently posted an update for the Beasts of the Mesozoic action figure line and I couldn't be more flattered. If you haven't already, I highly recommend you take a look at  their amazing campaign!


That's all for now.  Let's smash that funding goal!

Based on recent feedback, I've decided to forego my original idea of revealing the stretch goals as they're unlocked and have now added a list of all of the stretch goals with pricing. I know many have expressed interest in pledging early for specific figures to help up reach the stretch goals sooner, and I think this is worth trying. So here now is the full stretch goal figures list!

So that's the list! I realize that many won't be able to afford most of these right now, they get pretty pricey  considering their size and designs that I'm proposing. If funded, I expect to have more available later, but these will be lowest prices I can offer.

This has also been added to the main campaign page. As items are unlocked, I'll be revealing more prototype images and package art to go along with upcoming stretch goals.

I hope this helps a lot of you better plan your pledges. As always, let me know if you have any questions- thanks!

Just a quick THANK YOU to everyone, as we have reached our first 1,000 backers for this project.

I've been working on painting the Diabloceratops lately, and here's the very first look at the prototype!

I also wanted to let you all know that my recent podcast interview will Sal Briggman at crowdcrux.com is up now- click here

I mostly discuss my experience with the Raptor Series Kickstarter, but for anyone out there who is considering using the Kickstarter platform, I'd suggest giving this a listen.

Until next time- later!